Access to Snowflake objects is an integral part of the DataOps ecosystem. DataOps pipelines cannot (and will not) run successfully without being able to read from and write to Snowflake objects. Therefore, it is imperative that unauthorized users do not gain access to an organization's data for multiple reasons, including:

How does DataOps manage access to the organization's Snowflake objects?

The straightforward answer is via the Snowflake Object Lifecycle Engine or SOLE.

The Snowflake Access Control webpage has the following to say by way of answering this question:

At the same time, it is essential to understand the Snowflake role hierarchy implemented by SOLE.

To recap, the Snowflake describes roles as follows:

Roles are the entities to which privileges on securable objects can be granted and revoked. Roles are assigned to users to allow them to perform actions required for business functions.

You can also grant roles to other roles; thereby, creating a hierarchy of roles, as the following image shows: 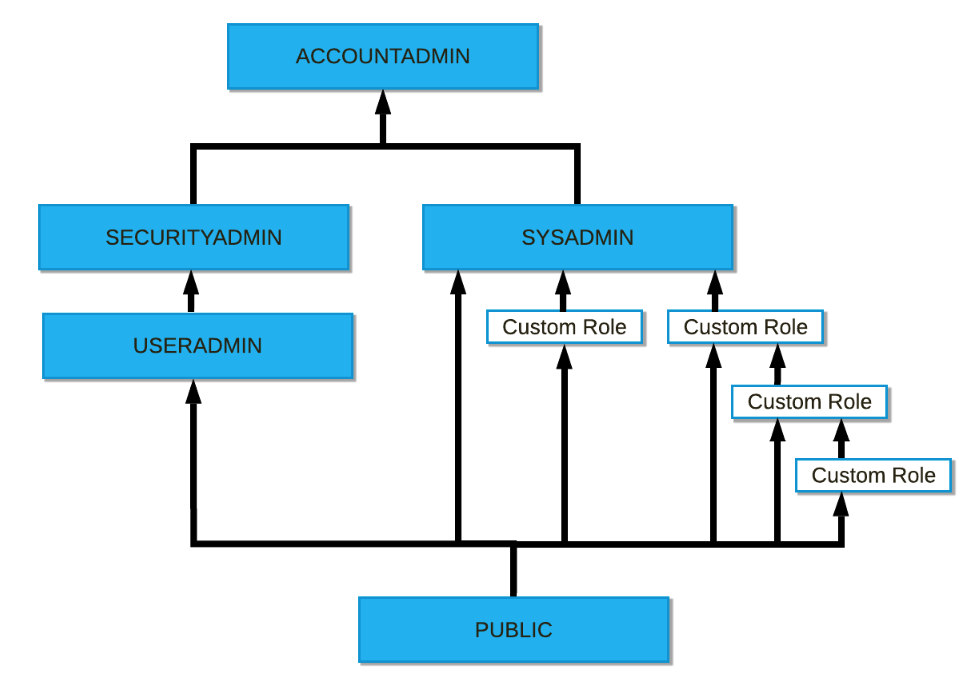 The ACCOUNTADMIN, SECURITYADMIN, SYSADMIN, USERADMIN, and PUBLIC roles are Snowflake system-defined roles. These roles inherit from each other.

The last point to note when looking at this image is that the system-defined role SYSADMIN is responsible for creating several custom roles and that several of these roles inherit from each other.

The implicit revoke only initiates when the keyword grants is used in the object configuration. If this keyword is not specified, the grants and revokes of privileges are not managed.

Based on this configuration, SOLE will generate revokes on privileges MONITOR, USAGE, CREATE SCHEMA, IMPORTED PRIVILEGES for the database DATABASE_1. Also, as no grants section is defined in the configuration of DATABASE_2, no revokes for this database are performed.

In order to manage revokes on all the privileges of a Snowflake Object, an empty grants must be specified in the Snowflake object's configuration, as the following example shows:

In this scenario, SOLE will generate revokes for all the privileges (MONITOR, USAGE, CREATE SCHEMA, IMPORTED PRIVILEGES, and MODIFY) on DATABASE_3.

However, to reduce the number of configurations that must be managed, SOLE can implicitly grant USAGE on the parent (and grandparent) objects for such roles.

The following example demonstrates this principle:

However, because SOLE implicitly grants USAGE to ROLE_1, ROLE_2 and SYSADMIN on both SCHEMA_1 and DATABASE_5, these roles can access TABLE_1.

Snowflake Object Lifecycle Engine's Grant Management provides a complete alternative to the Terraform Snowflake Provider for inspect, compare, and execute operations. SOLE Grant Management is enabled by default. Set the variable DONT_USE_SOLE_GRANT_MANAGEMENT to disable this and revert to using the Terraform provider to manage all object grants.

SOLE Grant Management inspects the existing grants that are part of the organization's Snowflake infrastructure during SOLE's PLAN lifecycle action. It compares the grants defined in the configuration with what's in Snowflake and determines what privilege and role grants must be added or revoked. Because this inspection is a run-time inspection, unlike the Terraform provider, no local state is required.

If you set DONT_USE_SOLE_GRANT_MANAGEMENT to any value, the following two sections do not apply.

SOLE Grant Management requires a Snowflake warehouse to perform object inspection. This warehouse must be assigned to the user used to connect to Snowflake and can either be specified in the variable DATAOPS_SOLE_WAREHOUSE or can be saved in the DataOps Vault path SNOWFLAKE.SOLE.WAREHOUSE.

Limiting the Roles and Users operated on​

By default, SOLE Grant Management will apply and revoke privileges on all environment (dev, QA, and prod) roles as per the YAML configuration. Apart from this functionality, it can also revoke all privileges.

You can use the role names, user names, or regular expressions in the specified_roles and specified_users keys.